iEER is an Interreg Europe funded flagship project that has been revived for 2022, bringing together 8 regions. Originally initiated in 2016 by a group of regions awarded with the European Entrepreneurial Region label, iEER defined smart paths and solutions to boost regional entrepreneurship ecosystems supporting young entrepreneurs in 2016-2020. This time supporting a sustainable and socially inclusive recovery from the Covid-19 pandemic.

iEER partners and stakeholders gathered in sunny and summery Brandenburg at TH Brandenburg for an eventful workshop on green and digital entrepreneurship on May 24-25. The iEER interregional events focus on learning from each other and encouraging and inspiring future actions.

On the second conference day, participants were grouped for a workshop to shape the discussions into further action. By using LEGO® Serious Play®, ideas were collected that could be transformed into action plans. At the end, the outcome of the workshop was surprisingly convergent in view of future cooperation for driving a green and digital transition: there is a huge need for collaboration with multiple actors, where information and results are openly and easily accessible; a community of knowledge that covers all of society.

Why LEGO® Serious Play® is helpful?

LEGO® has been encouraging children to use their power of imagination to turn their dreams into reality. We adults see LEGO® as toys for children and not as tools for solving serious problems. This is the first barrier for applying LEGO® Serious Play®.

LEGO® Serious Play® was designed for use in facilitated workshops with ADULTS to prompt dialogue and encourage reflection, as well as develop problem-solving skills and use of imagination.

To facilitate a successful LEGO® Serious Play® workshop we need to make the following points clear, why this method can help:

More than 20 participants representing 8 partners from 7 different regions, most of whom can communicate fluently in English. Nevertheless, for most people, this is a second language. This was how LEGO® Serious Play® helped. 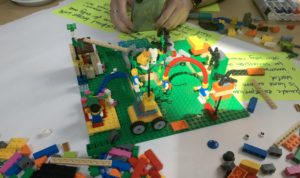 What we always observe in a LEGO® Serious Play® workshop

Last but not least, we want to thank the organization of TH Brandenburg, all the participants of the iEER network and the co-author of this post Maria Filipschack.

Copyright 2022 - TOM SPIKE - All Rights Reserved
Back To Top
X